Posted by BBQ Island on 1/14/2019 to Events
Welcome to 2019 BBQ Islanders! Just like a fine wine or a dry aged steak, BBQ Island only gets better with time. This year we have some really exciting things in the works, and we invite you to come along for the ride!
Here’s a sneak peak at what’s to come....
Read More
(0) Comments

Heath Riles & Malcom Reed - Two of the Best In BBQ

Posted by BBQ Island on 11/14/2018 to Cooking Classes
Heath Riles & Malcom Reed
Neither man require a formal introduction in the world of BBQ, but just in case you’ve been living under a rock, here’s a quick rundown of their combined accomplishments, features, and awards!
*Meet Health Riles and Malcom Reed in person at BBQ Island’s next cooking class on Friday November 30th and December 1st!
Read More
(0) Comments

What Happened at This Year’s Turkey Fest 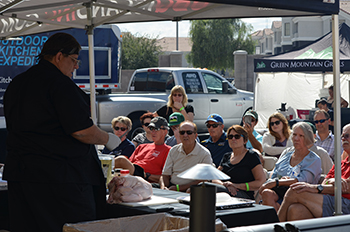 Posted by BBQ Island on 5/24/2017 to Events
Memorial Day is a revered American holiday that honors the men and women of the U.S. Armed Services who gave their lives for our country. At BBQ Island, we stand with our nation in recognizing these heroes, and we salute all current military members, veterans, and their families who have sacrificed so much for us.
Read More
(0) Comments

Posted by BBQ Island on 4/12/2017 to Events
Do you love the taste of a juicy, tender steak but are mystified about achieving mouth-watering steak perfection on your own backyard grill? Well, here’s your chance to learn the tricks of the trade! Sign up today for the ‘Steak 5 Ways’ class being held on April 29th from 11-3pm at BBQ Island in Scottsdale, and discover how it's done from the owner of Big Swede BBQ, Johan Magnusson.
Read More
(0) Comments

Looking for a holiday prime rib recipe? We'll do you one better by showing you exactly how to make it. All you need to do is come to our special prime rib class on December 17th, and you'll learn all the skills you need to really wow your guests at the holiday table this season.

Posted by BBQ Island on 11/23/2016 to Events
Thank you to all who came out on Saturday, November 12 for BBQ Island’s Turkey Fest event. It was a great day of grilling and turkey feasting!
Read More
(0) Comments

My Introduction to Competition BBQ

Posted by Bam Bam on 4/18/2012 to Events
So if you are anything like me, you probably were sitting in front of the TV the first night BBQ Pitmasters debuted. It was the Mesquite episode, and wow was I intrigued. Truthfully I had no idea about BBQ Pitmasters, I was just flipping through the channels and stumbled upon it. I kid you not, an hour later I was at Lowes buying an El Cheapo Brinkmann smoker! The next day, I fired her up at an elevation of 5600 feet in the middle of a northern Utah Winter, What an absolute blast that was!! I think back to some of the things that I cooked then and wow have things progressed! From that point on I probably cooked 3 times a week, and being that it was so cold and I was cooking on such a cheap smoker, I was probably by far Kingsfords best customer in UT. So after watching the show a few more times, and cooking about 30 different things on the Brinkmann, I decided to follow in the footsteps of Harry Soo of Slap Yo Daddy BBQ and buy a Weber Smokey Mountain Cooker.